Six Square is now Austin, TX’s Black Cultural District.  It was created in 2013.  The name chosen is historical.  Way back in 1928 the City of Austin forced African-American residents to live in a 6 square mile area.  It’s now one of the largest cultural districts in the U.S.A.  The George Washington Carver Museum is part of a complex that includes a library and a genealogical center.  I found it on a map that included some lesser known attractions.  Ruth and I had a bit of trouble finding it at 1165 Angelia Street in East Austin next to the library but our quest was worthwhile.

The George Washington Carver Library was built in 1926.  It was this city’s first library.  The facility was moved to its present location 7 years later and became Austin’s first branch library.  The George Washington Carver Museum, Cultural & Genealogy Center came along 14 years ago.  The Carver Museum is devoted to the preservation and exhibition of African American cultural materials, so the portion devoted to George Washington Carver has been somewhat diminished.   Nevertheless, seeing what was available was a great experience and I understand why the focus has shifted.  The Carver information and artifacts are mainly on view in the Center’s foyer but they are well featured and interesting.   Its 4 major museum-like galleries contain permanent displays about Juneteenth and information about successful Austin African American families.  The other rooms contain changing exhibits about the current Black experience in this part of Texas.   Carver is still a major subject, but this Center is clearly more dedicated to preserving and explaining the cultural history of Austin citizens of African descent. 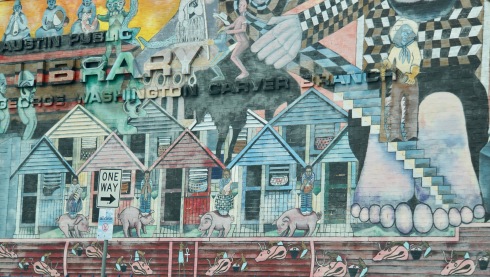 George Washington Carver’s parents were both slaves.   He recalled being about 2 weeks old when the Civil War ended.  He lived near Neosho, MO until he was 9.  Because he always had a strong desire for knowledge, he attended school in Neosho 8 miles from where he lived.  Carver finished high school in Kansas and earned a BS in Agriculture from Iowa State in 1894 when he was 30.  He also studied botany.  Although he was offered a job by Thomas Edison, he decided to become associated with a learning institution when Booker T. Washington founded Tuskegee Normal School.    GWC taught there for 40 years and created more than 500 new food products.  He realized that cotton farming exhausted the soil, so he introduced peanuts as a crop to help the land retain its fertility.   A bit eccentric, George Washington Carver had a pet bull snake and enjoyed embroidery and crocheting.   Deeply spiritual, he attributed his success to God’s inspiration.  One of his products containing peanut oil was developed during a polio epidemic.  It was a rubbing oil that, when applied to a polio victim’s limbs, helped prevent muscle deterioration.

This complex is a genuine Austin community asset that welcomes visitors.

Since the beginning, I've had to avoid writing about the downside of travel in order to sell more than 100 articles. Just because something negative happened doesn't mean your trip was ruined. But tell that to publishers who are into 5-star cruise and tropical beach fantasies. I want to tell what happened on my way to the beach, and it may not have been all that pleasant. My number one rule of the road is...today's disaster is tomorrow's great story. My travel experiences have appeared in about twenty magazines and newspapers. I've been in all 50 states more than once and more than 50 countries. Ruth and I love to travel internationally--Japan, Canada, China, Argentina, Hungary, Iceland, Italy, etc. Within the next 2 years we will have visited all of the European countries. But our favorite destination is Australia. Ruth and I have been there 9 times. I've written a book about Australia's Outback, ALONE NEAR ALICE, which is available through both Amazon & Barnes & Noble. My first fictional work, MOVING FORWARD, GETTING NOWHERE, has recently been posted on Amazon. It's a contemporary, hopefully funny re-telling of The Odyssey. END_OF_DOCUMENT_TOKEN_TO_BE_REPLACED
This entry was posted on Thursday, May 16th, 2019 at 10:15 pm and posted in Great City. You can follow any responses to this entry through the RSS 2.0 feed.
« Ash Meadows
IPHF Is Better Than Ever »