Who Is John P. McGovern? 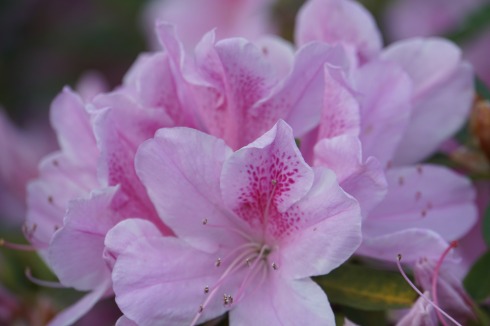 One of Houston’s best attractions is a little known place among outsiders that locals love, McGovern Centennial Park.   Ruth and I discovered it accidentally last year when we tried to visit the Atlas Obscura recommended Museum of Health and Medical Science too late in the day.  It’s across the street from McGovern.

Six million people use centrally located and huge Hermann Park in Houston each year.  Its Japanese Garden is especially pretty.  The McGovern Centennial Park was added to Hermann 5 years ago, replacing a former garden center.  Go early in the day if you want to use its free (for now) parking lot.  After leaving your car, enter McGovern’s themed gardens through the Cherie Flores Pavilion that was designed by the guy who created Apple stores all over the world.   At the other end of McGovern is the unusual Hawkins Sculpture Walk.  Between these is an artificial, climbable hill with an unnatural but clever waterfall tumbling from its top.  My favorite of the themed gardens grows seasonal vegetables so that kids can learn that those carrots their parents are always trying to get them to eat really don’t come from the frozen food aisle or a can.

The McGovern Centennial Garden flows naturally into Hermann with almost 500 trees, 760 well-groomed shrubs, 650 seasonal azaleas that were in riotous bloom when Ruth & I were there, roses, and even cactus.  The sculpture walk is different too.  I spent a lot of time wondering how Confucius and Cabeza de Vaca, who seem quite dissimilar, deserve to be among the 10 subjects rendered.  I didn’t even know some of the other atypical choices.

I’m glad I’ve had 3 opportunities to visit McGovern Centennial Park.  Maybe on the 4th I’ll finally understand the sculpture choices and know who Vicente Rocafuerte is.

Since the beginning, I've had to avoid writing about the downside of travel in order to sell more than 100 articles. Just because something negative happened doesn't mean your trip was ruined. But tell that to publishers who are into 5-star cruise and tropical beach fantasies. I want to tell what happened on my way to the beach, and it may not have been all that pleasant. My number one rule of the road is...today's disaster is tomorrow's great story. My travel experiences have appeared in about twenty magazines and newspapers. I've been in all 50 states more than once and more than 50 countries. Ruth and I love to travel internationally--Japan, Canada, China, Argentina, Hungary, Iceland, Italy, etc. Within the next 2 years we will have visited all of the European countries. But our favorite destination is Australia. Ruth and I have been there 9 times. I've written a book about Australia's Outback, ALONE NEAR ALICE, which is available through both Amazon & Barnes & Noble. My first fictional work, MOVING FORWARD, GETTING NOWHERE, has recently been posted on Amazon. It's a contemporary, hopefully funny re-telling of The Odyssey. END_OF_DOCUMENT_TOKEN_TO_BE_REPLACED
This entry was posted on Sunday, May 19th, 2019 at 9:00 pm and posted in Texas. You can follow any responses to this entry through the RSS 2.0 feed.
« Crown Candy Kitchen
Moravians »