A 5 Compass Birds of Prey Center 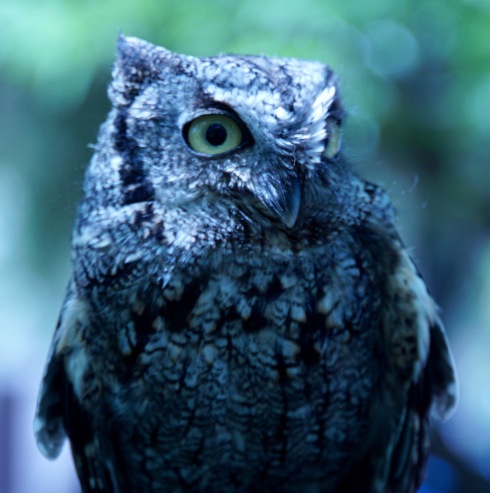 This is a Western screech owl.  Tate Mason was holding him on his gloved hand as Ruth & I entered the World Center for Birds of Prey in Boise.  If this screech owl has a pet name, I don’t know it.  I suspect he does not, but Tate was full of information about him because he had just finished a demonstration that centered on this cute, little bird.  We had missed his talk entirely.  Tate realized we were latecomers, so he patiently, expertly answered all of our questions about this tiny charmer, told us that he has a degree from Boise State, and then we learned that young Tate is the Director of this World Center for Birds of Prey.  He asked where we were from and informed us that the Oregon Zoo shares their mission to help endangered bird species, which we did not know.

Ruth and I tried to visit the World Center for Birds of Prey last year but were defeated by road construction.  This year we made it and I was stunned by the number of people there.  The Center sits atop a hill on West Flying Hawk Lane outside Boise.  It moved here in 1984 to become the main home of the Peregrine Fund and help get this falcon and, subsequently, other endangered birds like the California Condor and the Aplomado Falcon off endangered species lists.

By the early 1970s Peregrine Falcons were mostly absent from the eastern US due to a pesticide that has since been banned, and they were facing extinction.  Dr. Tom Cade went into action and the Peregrine was removed from the endangered species list in 1999.  Meanwhile, this Center’s bird rescuers learned a lot about species recovery.  New York State now has up to 2,000 Peregrine Falcons soaring about with several of them spotted in New York City.

Today interested visitors to the World Center for Birds of Prey can watch a live video feed featuring California Condors in their breeding facility, which is part of a 7,200-square-foot interpretive center where anyone can learn more than they will ever need to know about falcons, condors, eagles, etc.  A teenager named David, who volunteers here and is very knowledgeable about birds of prey, took Ruth and me behind the scenes to see the 5 rescued birds used 4 times each day in demonstrations here.  Anyone can see them in their cages if they know where to look. These included a Harpy Eagle and a Swainson’s hawk.  The center, David proudly told us, now has 12 hatched condor eggs among the 16 it has been watching.

The World Center for Birds of Prey calls the California Condor stunning and rare while Ruth and I winced at its appearance.  We learned that the best place to actually see one in the wild is at the Grand Canyon.  This bird is recovering.  Their number has grown from a paltry 22 to 488 according to the experts at this exciting Center near Boise.

Since the beginning, I've had to avoid writing about the downside of travel in order to sell more than 100 articles. Just because something negative happened doesn't mean your trip was ruined. But tell that to publishers who are into 5-star cruise and tropical beach fantasies. I want to tell what happened on my way to the beach, and it may not have been all that pleasant. My number one rule of the road is...today's disaster is tomorrow's great story. My travel experiences have appeared in about twenty magazines and newspapers. I've been in all 50 states more than once and more than 50 countries. Ruth and I love to travel internationally--Japan, Canada, China, Argentina, Hungary, Iceland, Italy, etc. Within the next 2 years we will have visited all of the European countries. But our favorite destination is Australia. Ruth and I have been there 9 times. I've written a book about Australia's Outback, ALONE NEAR ALICE, which is available through both Amazon & Barnes & Noble. My first fictional work, MOVING FORWARD, GETTING NOWHERE, has recently been posted on Amazon. It's a contemporary, hopefully funny re-telling of The Odyssey. END_OF_DOCUMENT_TOKEN_TO_BE_REPLACED
This entry was posted on Thursday, August 29th, 2019 at 9:04 pm and posted in Idaho. You can follow any responses to this entry through the RSS 2.0 feed.
« Mack Fever
Cardiff’s Different Castle »