Cardiff Castle is like no other European castle of my experience and very much worth seeing.  It’s different in 5 ways.  It’s completely urban being in the middle of the city, it’s opened for long hours (6 pm in the summer and even later if you take a ghost tour), it contains the Regimental Museum of the Royal Welsh, a fairly typical and really old castle structure, and the jaw-droppingly ornate rooms created by the 3rd Marquess of Bute shown below.  Fodor‘s once called Cardiff Castle “an odd but beguiling place” getting it exactly right.

Unless you’re really into military museums, you will find the Regimental Museum of the Royal Welsh the weakest part of this experience.  I did even though I found it worth a browse.  Part of it contained a display called “Firing Line”, which reported on Welsh involvement in the Battle of Waterloo with 2 regiments, one cavalry and the other infantry.  Welsh soldiers have served in both Iraq and Afghanistan.  Although this regiment’s legacy goes all the way back to 1689, it wasn’t officially formed until 2006 when a reorganization of the British Army occurred.  Over time The Royal Welsh has gained 244 battle honors, and Cardiff Castle’s medal room shows a lot of the ones it has won among the 6,000 total.  Forty-three Welsh soldiers have been given the Victoria Cross, Great Britain’s highest honor.  There’s lots of information about and artifacts from the Anglo-Zulu War of 1879.  One of them is a Zulu headdress worn by Cetswayo.   This is all downstairs under the gift shop and welcome desk and 3 Compass.

The castle itself, which sits atop an artificial hill, dates from 1081 and Norman invaders.  The original Keep was made of wood but it became stone by the 1130s.  Once larger than it is today, most everyone, including me, felt obligated to climb the stairs and continue to its top for the view.  It was a heady experience and, overall, 4 Compass. 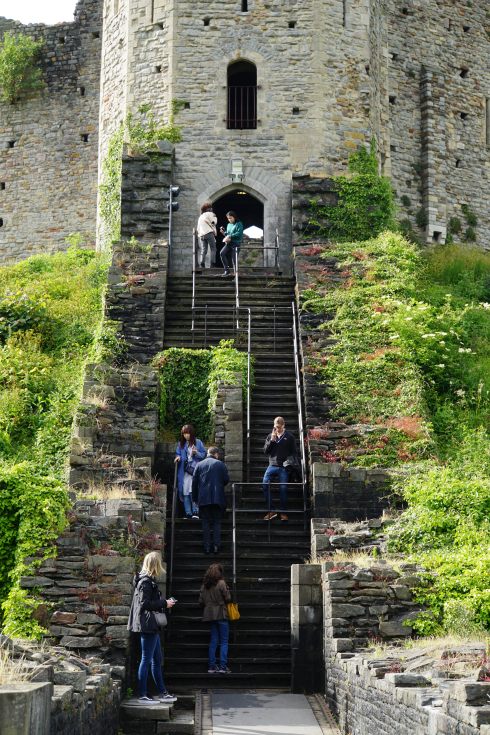 The real 5 Compass treasure here is the 3rd Marquess of Bute’s spectacular rooms in the Castle Apartments.  This Marquess was something of a rebel and Renaissance Man.  He was, for example, a lifelong Catholic. Born in 1847, he became the Marquess at the age of 6 months and an industrial magnet when Wales was an economic powerhouse.  Some say he was the richest man in the world for a time.  The guard who showed Ruth and me around got stars in his eyes when he spoke of the Marquess and his wife’s real home on the Isle of Bute, which still exists.  The man called it the greatest Victorian mansion in Great Britain.  The Marquess’ Cardiff Castle was just an occasional residence for him, a landed gentleman, scholar, and lover of architecture.  The overdecorated rooms that he created are truly spectacular.  Not all of what I saw was the work of this Marquess.  For example, many of the stained-glass windows, like the one featuring Henry VIII and Jane Seymour, date from 1931.  The 3rd Marquess, nevertheless, clearly spent a fortune and a lot of time turning several of this castle’s rooms into Gothic revival fantasies, the most outrageously ornate and out of control one is the Arab Room.  Fodor‘s called this project a “bizarre mishmash of styles”.  I call it an unforgettable travel experience.

The family owned this castle until 1947 when the 5th Marquess gave it to the people of Cardiff.

Since the beginning, I've had to avoid writing about the downside of travel in order to sell more than 100 articles. Just because something negative happened doesn't mean your trip was ruined. But tell that to publishers who are into 5-star cruise and tropical beach fantasies. I want to tell what happened on my way to the beach, and it may not have been all that pleasant. My number one rule of the road is...today's disaster is tomorrow's great story. My travel experiences have appeared in about twenty magazines and newspapers. I've been in all 50 states more than once and more than 50 countries. Ruth and I love to travel internationally--Japan, Canada, China, Argentina, Hungary, Iceland, Italy, etc. Within the next 2 years we will have visited all of the European countries. But our favorite destination is Australia. Ruth and I have been there 9 times. I've written a book about Australia's Outback, ALONE NEAR ALICE, which is available through both Amazon & Barnes & Noble. My first fictional work, MOVING FORWARD, GETTING NOWHERE, has recently been posted on Amazon. It's a contemporary, hopefully funny re-telling of The Odyssey. END_OF_DOCUMENT_TOKEN_TO_BE_REPLACED
This entry was posted on Friday, August 30th, 2019 at 9:57 pm and posted in Great Britain. You can follow any responses to this entry through the RSS 2.0 feed.
« A 5 Compass Birds of Prey Center
Avenue of the Saints »