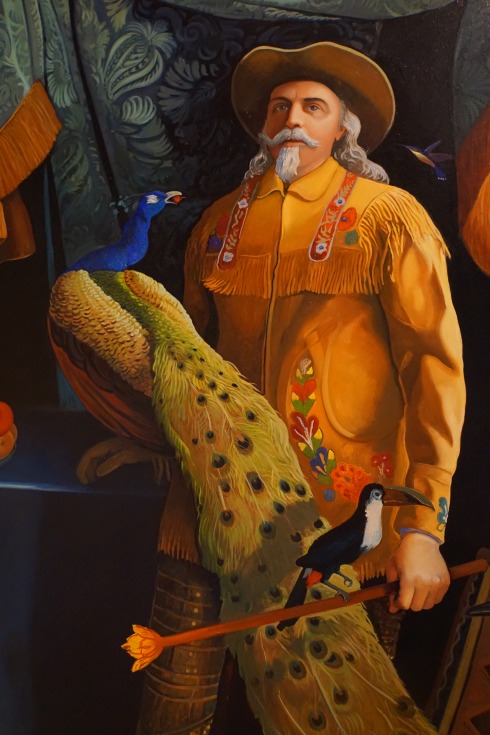 I hadn’t been to the Buffalo Bill Center of the West in Cody for many years, and Ruth had never been there.  It was time.  However, times have changed and the Center has grown to 5 museums under one roof.  All are 5 Compass experiences, which we didn’t know going in.  I only vividly remembered western art and a huge gun collection.  The Whitney Western Art  and Cody Firearms Museums were still excellent.  The latter, now headed by a woman, has just undergone a complete redo and reopened on July 6, 2019.  At first Ruth and I were uneasy about being required to spend almost $20 each for a 2 day pass, but it was definitely worth it.  We had only one day and went in thinking we’d see only the parts we were interested in or nostalgic about and skip the others.  A minimum of 4 hours to see all 5 is wisely recommended.  We found value in all five and spent far more than 4 hours seeing them.

We began with what I clearly remembered as a great western art collection.  The Whitney Western Art Museum opened in 1959 when many Americans had very different attitudes about the settlement of The West.  This part of The Cody Center was named The Whitney because some of these works are megawealthy Gertrude Vanderbilt Whitney’s masterworks from the 19th century.  The 4 paintings below show the evolution of opinion about The West’s settlement since 1959. 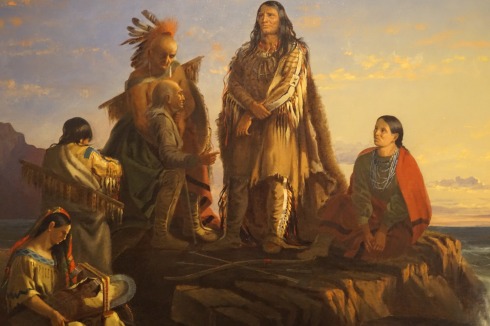 Henry Inman painted Hoo-Wan-Ne-Ka in 1872.  This highly decorated man’s name translates to “Little Elk”, and this was typical of the romantic vision of the Native American male in Inman’s time.   The 2nd painting shows the transition.  Native Americans are seen in an almost Renaissance-type arrangement in John Mix Stanley’s “The Last of Their Race”.  The accompanying explanation of the painting was both accurate and painfully honest.  It pointed out the veiled symbolic message revealed.  America’s Indian tribes represented by the dejected Native Americans in the painting “were doomed to disappear in the face of Euro-Americans’ westward migration.”  The 3rd shows deer by a majestic lake painted by Albert Bierstadt.  It remains untitled.    Bierstadt painted it in what is now Estes Park for an English Earl who was trying to decide where to place a future hotel.  The 4th is a funny but also menacing vision of bears, not innocent deer, enjoying a dinner intended for tourists.  It’s called “Out to Lunch” and was painted by Anne Coe in 1990.  After talking to a museum guard about current attitudes toward this part of the museum complex, Ruth and I concluded that, in order to survive and thrive, this part of the 5-museum Buffalo Bill Center of the West has to become rigidly honest about the history of The West.  Whether this honesty will be enough remains to be determined.  We noted that we were the only visitors in this part of the museum. 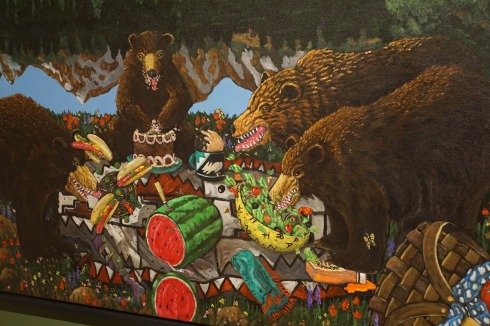 What is the future of Western Art?  The Buffalo Bill Center of the West balances displays of many contemporary western works by placing them among the traditional ones that now anger many Americans intent on rewriting history.  The other 4 museums were somewhat less controversial despite the fact that they were about guns and showman Buffalo Bill.

Since the beginning, I've had to avoid writing about the downside of travel in order to sell more than 100 articles. Just because something negative happened doesn't mean your trip was ruined. But tell that to publishers who are into 5-star cruise and tropical beach fantasies. I want to tell what happened on my way to the beach, and it may not have been all that pleasant. My number one rule of the road is...today's disaster is tomorrow's great story. My travel experiences have appeared in about twenty magazines and newspapers. I've been in all 50 states more than once and more than 50 countries. Ruth and I love to travel internationally--Japan, Canada, China, Argentina, Hungary, Iceland, Italy, etc. Within the next 2 years we will have visited all of the European countries. But our favorite destination is Australia. Ruth and I have been there 9 times. I've written a book about Australia's Outback, ALONE NEAR ALICE, which is available through both Amazon & Barnes & Noble. My first fictional work, MOVING FORWARD, GETTING NOWHERE, has recently been posted on Amazon. It's a contemporary, hopefully funny re-telling of The Odyssey. END_OF_DOCUMENT_TOKEN_TO_BE_REPLACED
This entry was posted on Sunday, September 8th, 2019 at 9:25 pm and posted in Colorado. You can follow any responses to this entry through the RSS 2.0 feed.
« The Adobe Eisendrath in the Sonoran Desert
Henry Shaw Propositions the Mayor Regarding Tower Grove »