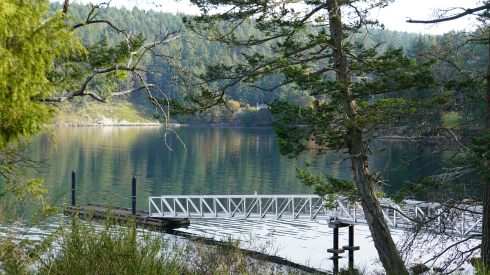 I wondered why the Penders Island Museum was down a remote road not too far from the only ferry landing. There were 2 other buildings here, and the spot near Otter Bay was especially scenic.  A woman from the Chamber of Commerce with the unlikely name of Melody Pender helped Ruth and me.  Being off-season, her office was closed but we persisted, met her, and she knew whom to call, Simone Marler, to get us into the museum.  We made a plan to meet Simone there and were glad we did because it was different from the typical.

The Penders island Museum succeeds because it pays close attention to its mission to offer “a great little museum” and it does.  This attraction is dedicated to only what happened on these 2 remote and isolated bits of land in the Gulf Islands, and Simone represents it especially well with her friendly and welcoming demeanor and comprehensive knowledge about the place.  In the summer this museum is opened from mid June to early September almost daily.  By this time of year, however, it’s understandably closed unless you meet someone who can make an appointment to see it for a modest suggested donation that keeps it going.  Simone had the ability to make 150 years of island history come alive and seem recent.  She is one of 8 Board Members who make this museum hum.

The Penders have been home to humanity for 5,000 years, and people mostly from Great Britain began settling here in 1872.  The Roes from Scotland were early residents.  Hard-working and childless, they arrived in 1896 and cleared 30 acres land, built a kit house, planted an orchard, and developed a resort.  Their house is still where they built it for $538 and is now this museum in an unusual location for a tourist spot.  The site is being developed by the Gulf Islands National Park Reserve and, established as recently as 2003, it’s only Canada’s 40th park and on an island with a sub-Mediterranean climate and 2,500 residents who didn’t get electricity until 1956. The farm-resort developed by the Roes with cabins on a rocky, remote point was for middle class travelers who were often willing to perform farm chores. It did not attract the  resort-filling wealthy.  The Roes guests would often return year after year  to this quiet vacation spot that didn’t close until 1991.

The general store on North Pender, one of only 3 in the area, was demolished in 2016, and I suspect that some of the grouped artifacts in Simone’s museum are from it.  The time line on this museum’s new website begins in 1977.  Its 1st website was launched only 8 years ago.  Simone is very proud of her museum and the Pender items she and others have accumulated, like the bicycle wheel below that shoppers spun to get free groceries.

The strictly local artifacts of recent accumulation amassed by dedicated residents and displayed in an early 20th century kit house near the Roesland Resort result in a unique travel experience.

Since the beginning, I've had to avoid writing about the downside of travel in order to sell more than 100 articles. Just because something negative happened doesn't mean your trip was ruined. But tell that to publishers who are into 5-star cruise and tropical beach fantasies. I want to tell what happened on my way to the beach, and it may not have been all that pleasant. My number one rule of the road is...today's disaster is tomorrow's great story. My travel experiences have appeared in about twenty magazines and newspapers. I've been in all 50 states more than once and more than 50 countries. Ruth and I love to travel internationally--Japan, Canada, China, Argentina, Hungary, Iceland, Italy, etc. Within the next 2 years we will have visited all of the European countries. But our favorite destination is Australia. Ruth and I have been there 9 times. I've written a book about Australia's Outback, ALONE NEAR ALICE, which is available through both Amazon & Barnes & Noble. My first fictional work, MOVING FORWARD, GETTING NOWHERE, has recently been posted on Amazon. It's a contemporary, hopefully funny re-telling of The Odyssey. END_OF_DOCUMENT_TOKEN_TO_BE_REPLACED
This entry was posted on Wednesday, November 13th, 2019 at 11:52 pm and posted in Canada. You can follow any responses to this entry through the RSS 2.0 feed.
« Like Royalty: Abkhazi Garden
Maps »