When the old capitol is not demolished or burns, sometimes the state it’s in turns that old building into a museum like Iowa and Florida have done.  Other states keep these buildings for patriotic tours and heritage preservation.  This has happened in Nevada and Alabama.  Nevada became an early state because President Lincoln needed its gold to fight the Civil War.  Maryland has the oldest still active state capitol.  Passing through Iowa City in the summer of 2019 as Ruth & I followed the Avenue of the Saints north, we stopped to see Iowa’s Old Capitol Museum and discovered an amazing staircase in its 1st Capitol building.

President Polk admitted Iowa to the Union as the 29th state in 1846.  There were already 3 large settlements in the eastern half of this new state, but it was still largely prairie and forest when the capitol moved west to Des Moines 11 years later.  A big influx of new Iowans occurred in the 1870s.  After the legislators left, Iowa City’s capitol became the University of Iowa’s first building, and the university president’s office was in it.  The House Chamber became a chapel used for daily services.  It didn’t become a museum for another 119 years. 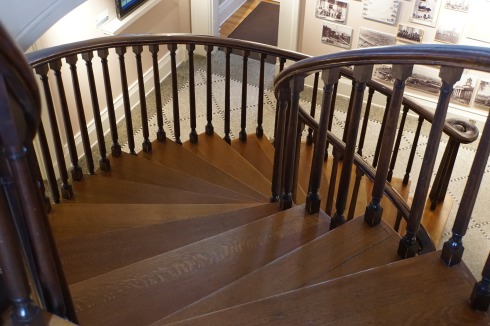 The main thing to see in this old building is its reverse spiral staircase, which was and still is a stunning sight.  Such a staircase is not easy to build and this one was troubled.  For example, the architect left the project before it was assembled and it was too short when installed.  A water cooler filled the hole for 80 years.  This is the 2nd reverse spiral staircase in this historic building, but it’s based on the original design and is very beautiful.

Above the stairs that can be climbed by all visitors are both interior and exterior domes.  The exterior one was originally covered with real gold leaf.  I was impressed with this fact until I learned that the amount of gold actually used was the size of a golf ball.

Long after the original capitol building became a museum, the tower caught fire.  This occurred in 2001, and the tower was completely destroyed.  The old capitol’s bell fell and broke. It was the 3rd bell in this dome.  The bell landed on its side in the fire debris and was removed and put into a display case for all to see.

There are more artifacts around. The most interesting to me was an 1880s Mermod music box that played cylinders and was used for dances and parties. It played mostly patriotic songs, which must have been much appreciated by university partygoers.  The Mermod is on permanent loan to this museum  The Senate Chamber has been restored to its original look including candles used for illumination and quill pens that legislators used to sign bills into law.

A new dome was put in place only 2 years after the fire, and the museum reopened in 2006.  This museum is more interesting than it sounds and the staircase is worth some effort to see.  This is a grand old building!

Since the beginning, I've had to avoid writing about the downside of travel in order to sell more than 100 articles. Just because something negative happened doesn't mean your trip was ruined. But tell that to publishers who are into 5-star cruise and tropical beach fantasies. I want to tell what happened on my way to the beach, and it may not have been all that pleasant. My number one rule of the road is...today's disaster is tomorrow's great story. My travel experiences have appeared in about twenty magazines and newspapers. I've been in all 50 states more than once and more than 50 countries. Ruth and I love to travel internationally--Japan, Canada, China, Argentina, Hungary, Iceland, Italy, etc. Within the next 2 years we will have visited all of the European countries. But our favorite destination is Australia. Ruth and I have been there 9 times. I've written a book about Australia's Outback, ALONE NEAR ALICE, which is available through both Amazon & Barnes & Noble. My first fictional work, MOVING FORWARD, GETTING NOWHERE, has recently been posted on Amazon. It's a contemporary, hopefully funny re-telling of The Odyssey. END_OF_DOCUMENT_TOKEN_TO_BE_REPLACED
This entry was posted on Tuesday, November 19th, 2019 at 11:56 pm and posted in Midwest, United States. You can follow any responses to this entry through the RSS 2.0 feed.
« The UBC Botanical Wondergarden
James Patterson »