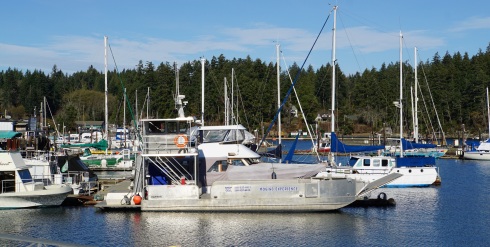 Before we went to the Gulf Islands, I read a lot about its only town, Ganges.  It seemed like an odd sort of place.  Writers never talked about Gangeites.  They would begin with activities like kayaking but then end up describing the shops.  They would rave about the Saturday Market in Centennial Park that begins in June but ends in October as the main tourist activity.  Ruth & I had trouble finding accommodations on Salt Spring Island.  There didn’t seem to be anything resembling a typical hotel in Ganges.  But then we went there and I found it sybaritic and pleasant.  That’s when I learned that Ganges is a town without houses and citizens.  There are condos at Grace Point but few humans actually live in Ganges.  The 11,000 people who reside on Salt Spring Island all seem to be artists or musicians who own boats and know each other, tolerate outsiders, and visit Ganges in their electric vehicles (parking is a major problem) almost daily to judge it quaint but overly commercialized.

It’s definitely both quaint and over commercialized.  There are many art galleries in town but no houses.  There is a bookstore, a movie theater, and places to get a cup of coffee but no churches.  There is a hospital but nothing resembling a Walmart.  There is no McDonalds, but restaurants like the Tree House Cafe and bakeries like Barb’s are crowded.  There is one grocery store oddly called Thrifty.  It’s very upscale.  Roads tend to be hilly, curvy, and ending at no trespassing and beware of dog signs.  This is true on the Penders too.   Is this the community of the future in a warming, overpopulated world?  if so, Ganges is way ahead of every other town. 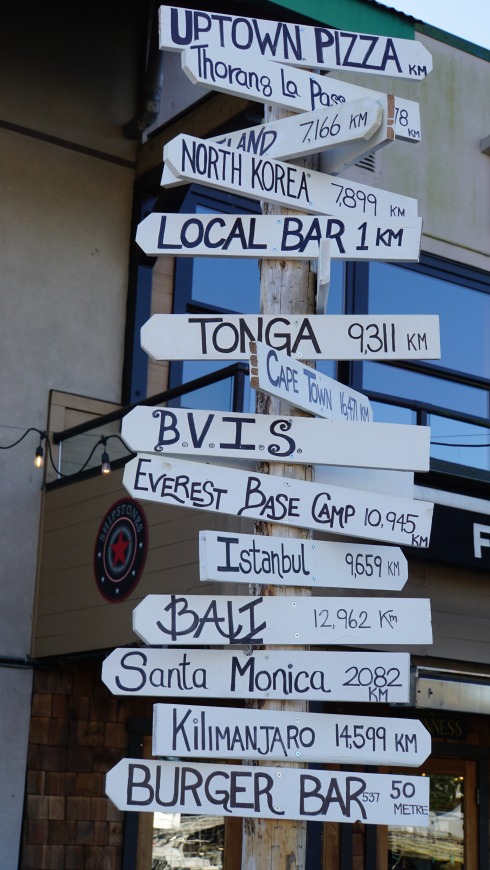 Ganges was named after the largest of the 3 flagships of the Royal Navy’s Pacific Squadron.  It was built in the city in India in 1821 that used to be called Bombay.  Salt Spring was named for the salty springs now on private property at the north end of the island.  The Cowichan people called this island Klaathem, their word for salt.  First Nations folk were discussed in a seminar we attended one evening in Ganges library.

There are more than 200 electric cars on Salt Spring Island.  This is the “highest density by population” of these cars in Canada according to the Gulf Islander Visitors’ Guide.  This publication calls this place “our island paradise”.   In a way, it is.

Since the beginning, I've had to avoid writing about the downside of travel in order to sell more than 100 articles. Just because something negative happened doesn't mean your trip was ruined. But tell that to publishers who are into 5-star cruise and tropical beach fantasies. I want to tell what happened on my way to the beach, and it may not have been all that pleasant. My number one rule of the road is...today's disaster is tomorrow's great story. My travel experiences have appeared in about twenty magazines and newspapers. I've been in all 50 states more than once and more than 50 countries. Ruth and I love to travel internationally--Japan, Canada, China, Argentina, Hungary, Iceland, Italy, etc. Within the next 2 years we will have visited all of the European countries. But our favorite destination is Australia. Ruth and I have been there 9 times. I've written a book about Australia's Outback, ALONE NEAR ALICE, which is available through both Amazon & Barnes & Noble. My first fictional work, MOVING FORWARD, GETTING NOWHERE, has recently been posted on Amazon. It's a contemporary, hopefully funny re-telling of The Odyssey. END_OF_DOCUMENT_TOKEN_TO_BE_REPLACED
This entry was posted on Friday, November 22nd, 2019 at 9:48 pm and posted in British Columbia, Wisconsin. You can follow any responses to this entry through the RSS 2.0 feed.
« York Minster’s Exterior
A 5 Compass Columbus Museum »