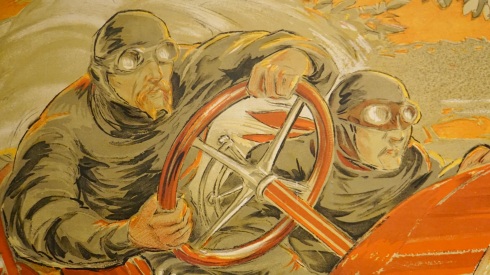 “Legends of Speed” is a rare and unusual show for an art museum to have.  Its 4 month plus run at the Phoenix Art Museum, however, is both welcomed and appropriate.  Three generation of our family went to see it the day after Thanksgiving, and most of us really enjoyed it.  Only the younger females found it boring.  Most of us went from it to see Ford V Ferrari, a very successful movie with a neat tie-in to this show.  If you can’t go to Phoenix, at least check out this winning film about racing before the Academy Awards are given out in 2020. 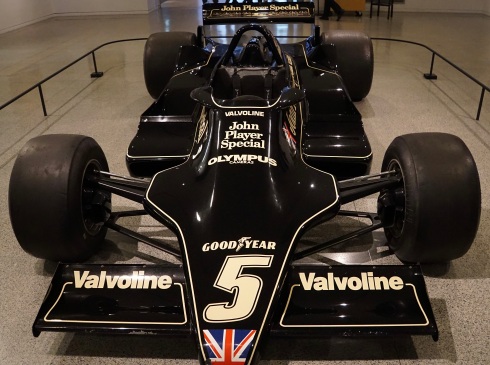 This show at the Phoenix Art Museum includes 22 race car icons from the past 60 years.  There’s lots of information about each of them both in the show and in the catalog (catalogue is the British spelling) that accompanies it.   The cars seen are truly exceptional examples of the best creations in the racing world.  They include winners at Le Mans, the Italian Grand Prix, and the Indianapolis 500.  As a matter of fact, a few of them are on loan from this Indiana museum.  They have been driven by the best risk takers in the racing world.

The 22 race icons were loaned to the Phoenix Art Museum (PAM) for this show by collectors in Arizona and across the United States.  PAM expects  300,000 people to see it.   This is the hopeful expectation of this museum’s deputy Director for Curatorial Affairs, Gilbert Vicario.  I learned this from Hayley Ringler’s fine article published in the Phoenix Business Journal and available on-line.  Hoping to attract occasional art museum visitors, Vicario conceived the idea for this one-of-a-kind show.  I suspect that many of the men seeing it with me could be described as “occasional” museum visitors.  There were many of them but also many women and teenagers who seemed to be enjoying this show too. 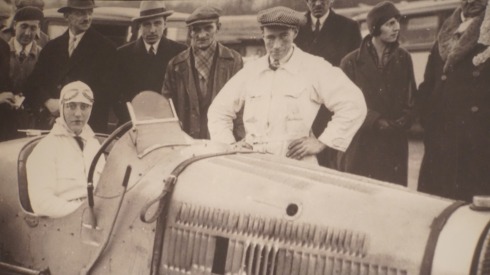 Lyn St. James, the 1st woman to win the Indy 500 Rookie of the Year award, helped to mount this show and wrote the introduction in the catalog.  I also surmise that she is the reason why a racing legend I had never heard of named Mariette Helene Delangle was included.  Better known as Helle Nice, Delangle loved auto racing.  A model and actress living in Paris, she drove Bugattis and often competed with men in Grand-Prix events and won.  She ended her racing career with several top 10 finishes.

Two of the cars seen in this exhibit are prominently featured in Ford V Ferrari.  The story told in this excellent film is repeated in this PAM show next to a 1968 Ford GT40 from the Rob and Melani Walton Collection.  Yes.  Rob is from THAT Walton Family.  The GT40 also crossed the Le Mans finish line first in 1966 and 1967, and with a chassis 1075 in 1968 and 1969.

Phoenix is a city with a serious car culture and is home to many collectors.  “Legends of Speed” began on November 3, 2019, and will be in this museum until March 15, 2020.   This is an exclusive that will not travel to other museums.   I hope you, like me, gets to see both Ford V Ferrari and this rare show of race winners. 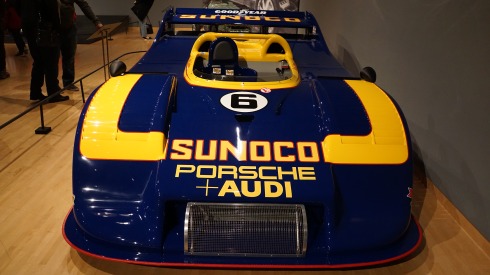 Since the beginning, I've had to avoid writing about the downside of travel in order to sell more than 100 articles. Just because something negative happened doesn't mean your trip was ruined. But tell that to publishers who are into 5-star cruise and tropical beach fantasies. I want to tell what happened on my way to the beach, and it may not have been all that pleasant. My number one rule of the road is...today's disaster is tomorrow's great story. My travel experiences have appeared in about twenty magazines and newspapers. I've been in all 50 states more than once and more than 50 countries. Ruth and I love to travel internationally--Japan, Canada, China, Argentina, Hungary, Iceland, Italy, etc. Within the next 2 years we will have visited all of the European countries. But our favorite destination is Australia. Ruth and I have been there 9 times. I've written a book about Australia's Outback, ALONE NEAR ALICE, which is available through both Amazon & Barnes & Noble. My first fictional work, MOVING FORWARD, GETTING NOWHERE, has recently been posted on Amazon. It's a contemporary, hopefully funny re-telling of The Odyssey. END_OF_DOCUMENT_TOKEN_TO_BE_REPLACED
This entry was posted on Tuesday, December 3rd, 2019 at 11:45 pm and posted in Arizona. You can follow any responses to this entry through the RSS 2.0 feed.
« Inside York Minster
Louis Sullivan Design Reborn »