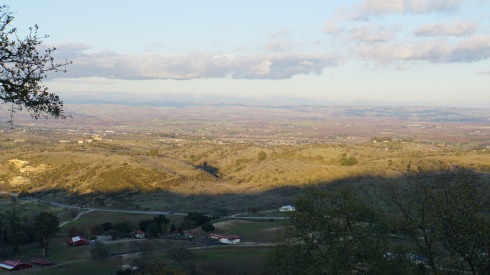 I have never had a bad wine from Paso Robles.  That’s why when we planned to celebrate Ruth’s birthday in California last year we decided to spend a day there.  This was a big mistake despite the fact that Paso Robles is probably one of the hottest travel destinations on the planet right now.  It’s among The New York Times 52 destinations for 2020, ranking #6.  This was no surprise but I didn’t know that while planning the trip.  My planning for Paso Robles was more detailed than for other places.  I actually made a list of wines and the wineries that produced them hoping to visit some of them, and I verified the fact that most tasting rooms were opened on an otherwise “often-closed” traveler’s Monday. 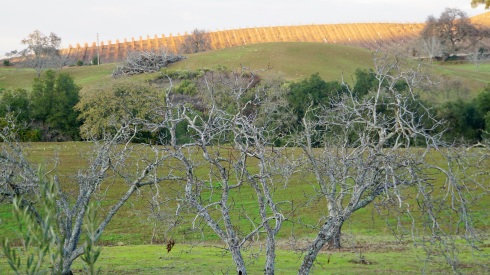 A wine fan in Fresno who had been to Paso told me that  some roads to it are full of curves, ascents, and descents.  This certainly describes Highway 58!   On the plus side, 58 was beautiful and devoid of other vehicles.  However, we didn’t get to Paso Robles, which is 30 miles north of San Luis Obispo and east of Hearst’s Castle close enough for day-tripping, until nearly noon.  We took a look at Paso’s city center, figured out parking, and went to the downtown visitor center where Callie was especially good at helping travelers.  She answered my first question, “How many wineries are in Paso Robles?” without hesitation.  “249”  We had had a passing look at several wineries on the way in and decided that there was still a lot of room for growth.  Callie marked the wineries on my list on the map, apologized that all of Paso’s wineries were not on it, and told Ruth & me about her town’s exploding reputation.  I picked up a copy of Paso Magazine, one of those glossy publications with lots of smiling real estate agents unashamedly promoting houses “starting in the mid $700K’s” because this is California where that’s a bargain.

We headed for one of the wineries on our list, Le Cuvier.   We were soon in the competent company of John Munch, wineherd and plenipotentiary according to his tasting list.  All of the wines he poured for us were sensational and paired with tasty food samples.  I was pleased that John agreed with me that Paso Robles is “The New Napa” while aware of the fact that he was attempting to sell wine.  I asked this glib man who told us that he had studied wine making in France to tell me about what makes Paso Robles unique, and he told me that Paso’s valley is sandy on the west side and alluvial on the east, two very different soils for grape growing.  He told me about how many of the local wineries do dry farming due to lack of rain and irrigation possibilities.   He told me that Le Couvier does not advertise, and that 95% of its sales were to wine club members.  While he talked, he poured wine after wine.  They were all excellent.  The best food treat was the French Comté cheese.  We bought 2 wines.  One was a cabernet sauvignon that didn’t make it home.  When we drank it for Ruth’s birthday, however, I noticed that it didn’t taste as complex as it did in Le Cuvier.  Maybe it was because of the food.  Maybe it was John’s personality.  He wrote the wine notes we were reading while sipping and telling us that the best restaurant in Paso Robles is Bistro Laurent, now called BL Brasserie.  I have noted in all tasting rooms that the wines never taste the same elsewhere as they do while there.  This is not to say that Le Couvier’s cab was not wonderful! 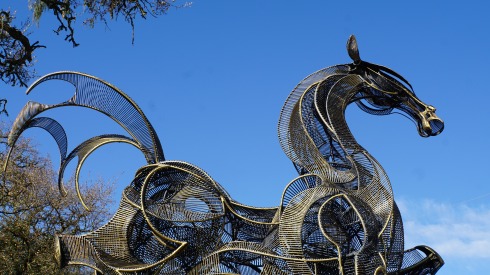 to be continued.  Hank

Since the beginning, I've had to avoid writing about the downside of travel in order to sell more than 100 articles. Just because something negative happened doesn't mean your trip was ruined. But tell that to publishers who are into 5-star cruise and tropical beach fantasies. I want to tell what happened on my way to the beach, and it may not have been all that pleasant. My number one rule of the road is...today's disaster is tomorrow's great story. My travel experiences have appeared in about twenty magazines and newspapers. I've been in all 50 states more than once and more than 50 countries. Ruth and I love to travel internationally--Japan, Canada, China, Argentina, Hungary, Iceland, Italy, etc. Within the next 2 years we will have visited all of the European countries. But our favorite destination is Australia. Ruth and I have been there 9 times. I've written a book about Australia's Outback, ALONE NEAR ALICE, which is available through both Amazon & Barnes & Noble. My first fictional work, MOVING FORWARD, GETTING NOWHERE, has recently been posted on Amazon. It's a contemporary, hopefully funny re-telling of The Odyssey. END_OF_DOCUMENT_TOKEN_TO_BE_REPLACED
This entry was posted on Tuesday, January 14th, 2020 at 9:45 pm and posted in California. You can follow any responses to this entry through the RSS 2.0 feed.
« Salt Spring Island
Paso Robles Again »