In preparation for a trip to Texas, I’ve been reading an old book about its history called Lone Star.  First published about 50 years ago, it’s a real lap filler of more than 700 pages and not especially politically correct.  It does fill in some of the colorful and astonishing details about the formation of this oversized state that’s like no other.  Texas has had far more history than most others states.  I was surprised when I came across a reference to a Texas landmark that Ruth and I visited early in 2019.  In a few sentences, Lone Star captures the importance of Fort Concho.   When I was there, I saw what remains of a frontier fort like so many others in the Plains States, but I don’t think I realized exactly how important it was.  Fort Concho was in the middle of a line of cavalry forts built after the Civil War from Mexico to Canada between 2 warring groups.  To the west  were the vast plains and plateaus where Native Americans, especially Comanches and Kiowas, roamed free and chased buffalo.  To the east were the farms and homesteads of settlers from the states east of the Mississippi River and many European countries.  The inevitable clashes were to be controlled by the soldiers at Fort Concho and others up and down central Texas.

Right in the middle of this state, San Angelo was a big surprise.  Despite an excellent visitor center, it seemed to be resisting  the tourism that has brought hordes of outsiders and the trouble they bring with them.  Its attractions were modest, not  Disneyesque.   Fort Concho was its biggest tourist lure, but I was one of only 2 exploring it on a comfortable and sunny winter afternoon.  There were many others there, but they were locals having meetings and setting up what appeared to be a gala event for other Fort Angelians.  More than one person who enjoyed Christmas at Old Fort Concho told me that the best thing to do in town was walk along the Concho River. 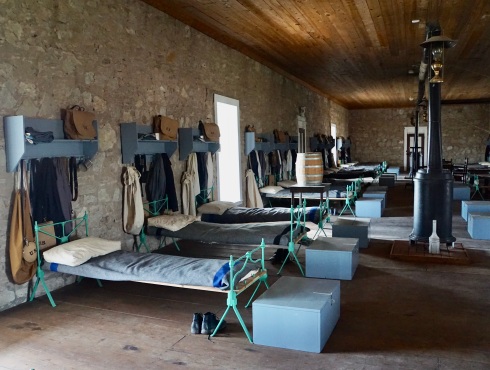 Fort Concho was established 2 years after the Civil War ended and lasted for only 22 years.  The buildings constructed of native limestone were typical of frontier forts.  There were once 40 buildings here housing calvary, infantry, officers and support personnel.  Fort Concho’s function deemed fulfilled, it was deactivated in 1889 and became residences and commercial ventures that preserved 23 of its original buildings.   Others, like the hospital that was struck by lightning and partially burned have been restored.  African American Buffalo Soldiers were stationed here.  Most fort personnel were a mobile police force of about 350 men and 35 to 50 officers trying to control trouble on the frontier.  Barracks One has become a visitors’ center.  Tours can include its temporary and permanent exhibits, 2 other barracks, the stables, headquarters, and some officers quarters.  Some of its ordinary frontier buildings have been furnished in period decor to show what Concho must have been like, or they contain museums like the R. H. Danner Museum of Telephony, which is more interesting than it sounds, and a museum of frontier medicine.

Despite having shrunk to 40 acres, seeing Fort Concho requires a lot of walking.   It was worth seeing,  but once was enough.

Since the beginning, I've had to avoid writing about the downside of travel in order to sell more than 100 articles. Just because something negative happened doesn't mean your trip was ruined. But tell that to publishers who are into 5-star cruise and tropical beach fantasies. I want to tell what happened on my way to the beach, and it may not have been all that pleasant. My number one rule of the road is...today's disaster is tomorrow's great story. My travel experiences have appeared in about twenty magazines and newspapers. I've been in all 50 states more than once and more than 50 countries. Ruth and I love to travel internationally--Japan, Canada, China, Argentina, Hungary, Iceland, Italy, etc. Within the next 2 years we will have visited all of the European countries. But our favorite destination is Australia. Ruth and I have been there 9 times. I've written a book about Australia's Outback, ALONE NEAR ALICE, which is available through both Amazon & Barnes & Noble. My first fictional work, MOVING FORWARD, GETTING NOWHERE, has recently been posted on Amazon. It's a contemporary, hopefully funny re-telling of The Odyssey. END_OF_DOCUMENT_TOKEN_TO_BE_REPLACED
This entry was posted on Saturday, January 18th, 2020 at 10:54 pm and posted in Texas. You can follow any responses to this entry through the RSS 2.0 feed.
« The Lehigh Valley’s Bethlehem
At The Getty Center »