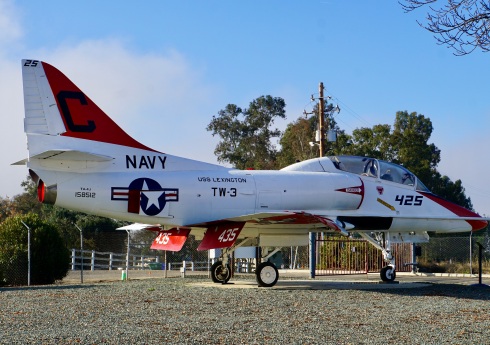 While in Paso Robles, Ruth & I looked for other sights to visit besides winery tasting rooms.  It was Monday, not the best day for tourism.  Two attractions we hoped to see, Sensorio and the Pioneer Museum, were not available.  Sensorio’s Field of Light has been so popular that it has been extended until the end of June 2020.  Perhaps it will be continued beyond then.  In any event, it can only be seen in the evenings from Thursday through Sunday.   The Pioneer Museum was closed on  Mondays.  Too bad since Paso Robles has a curious and interesting past.  It was once known as a mineral bath and cowboy town, but wine-making has taken over.

We went to the Estrella Warbirds Museum but it was closed too.  However, a delightful couple who volunteer their time there, just happened to be leaving as we were arriving.  Judy and Gary offered to show us around.  They even invited us back the next morning to learn  more.  Thanks to them and other directors there for a meeting, we got a thorough tour and lots of personal information about this attraction’s mission.  Judy and Gary have a 30 year history with the place.  Estrella is an expanding operation and a must for those who like airplanes and cars.  The upside is below: the downside is that Estrella is the kind of place that puts everything it’s given on display.  Ruth and I heard some great stories but would not have been as entertained if not for our accommodating hosts.

For example, we got to see the restored C-47 that a contingent of locals was able to take to the 75th D-Day Commemoration in Normandy last year.  A bottle of red from the Paso Robles Eberle winery that was on the plane, “Betsy’s Biscuit Bomber”, was on display.  Gary found the excursion to France memorable.  I learned from him that Estrella is expanding by building a new hangar.  Ruth bristled when Gary and Judy told her about the treatment of Air Force Women during World War II as we looked at a display honoring WASPs.  There were more than a thousand females in the Women Airforce Service Pilots wing of the U.S. Air Force back then.  Civilian volunteers, these women learned to fly and test planes but many were killed in the process.   They not only received no pay, they had to buy their own uniforms.

The Estrella Warbirds Museum is located near the Paso Robles Municipal Airport that was an Army Air Corps P-38 base during World War II.  I enjoyed looking at the being-restored and fully-restored planes in the Warbirds collection.  I also really derived considerable pleasure in seeing the Woodland Auto Display in its own building.  This is an impressive and comprehensive collection of classic cars like the 1931 Packard above, but its specialty is street rods and sprint and sports cars that have more meaning since the recent success of Ford v Ferrari.  Dating myself, I must admit that seeing one of veteran actor Steve McQueen’s motorcycles was a thrill.   There were only 6 of the “All Weather Sport Sedan” Packards built, and it’s assumed that only 3 of them survive, including this beauty on display in Paso Robles.

Since the beginning, I've had to avoid writing about the downside of travel in order to sell more than 100 articles. Just because something negative happened doesn't mean your trip was ruined. But tell that to publishers who are into 5-star cruise and tropical beach fantasies. I want to tell what happened on my way to the beach, and it may not have been all that pleasant. My number one rule of the road is...today's disaster is tomorrow's great story. My travel experiences have appeared in about twenty magazines and newspapers. I've been in all 50 states more than once and more than 50 countries. Ruth and I love to travel internationally--Japan, Canada, China, Argentina, Hungary, Iceland, Italy, etc. Within the next 2 years we will have visited all of the European countries. But our favorite destination is Australia. Ruth and I have been there 9 times. I've written a book about Australia's Outback, ALONE NEAR ALICE, which is available through both Amazon & Barnes & Noble. My first fictional work, MOVING FORWARD, GETTING NOWHERE, has recently been posted on Amazon. It's a contemporary, hopefully funny re-telling of The Odyssey. END_OF_DOCUMENT_TOKEN_TO_BE_REPLACED
This entry was posted on Friday, January 24th, 2020 at 9:27 pm and posted in California. You can follow any responses to this entry through the RSS 2.0 feed.
« England’s Broadway Entertains
Dallas’ Thanks-Giving Square »