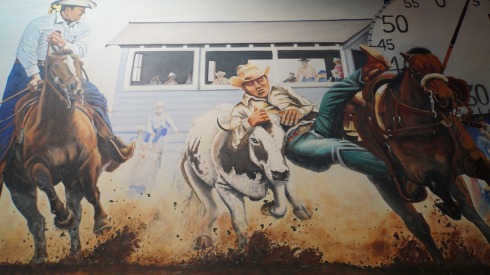 One time Ruth and I vowed to stop in every town between Dallas and Houston and find an attraction to visit.  This time we stopped only in Corsicana for pecan bread and Huntsville, Sam Houston’s stomping ground and home to one of the largest statues in the world.   Passing through Huntsville on I-45, I spotted a sign for the Texas Prison Museum and recalled a friend telling me about its infamous rodeo.  We decided to take a look.

It was an incredible experience that began with an introductory 4½ minute film.  Huntsville is home to the oldest prison in Texas.  It opened in 1848 when a horse thief was incarcerated, according to one source.   Another source claimed 1867 was the year of Huntsville’s founding.  Conditions were repellent in most Texas prisons until reforms began in the 1930s.  Mechanized farming and hard labor kept prisoners busy.  The Thunderbolt, its electric chair, was retired in 1964, and serious reform of the entire system occurred in the 1970s.  Work and education are now its goals.  The museum about this prison system  opened in 1989 but moved to its present location in 2002. 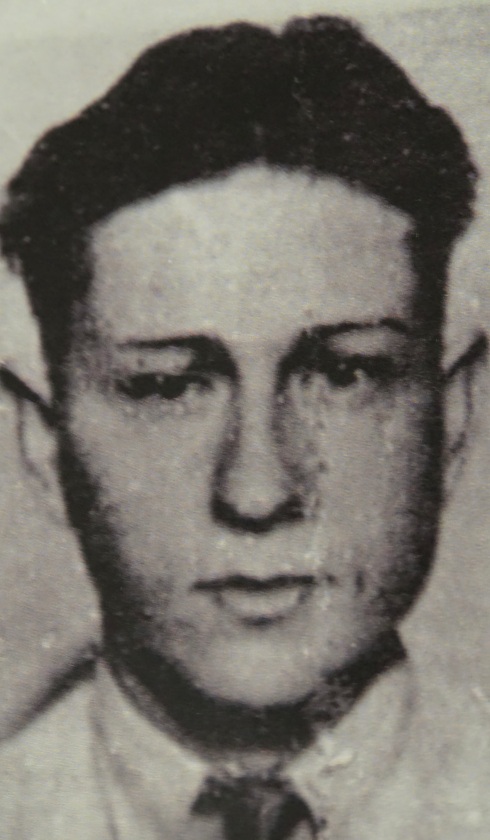 Three famous inmates spent time in the Huntsville unit.  Notorious gunslinger John Wesley Hardin was one.  Clyde Barrow went to prison near Dallas for a string of burglaries in the area.  He received a 14 year sentence.  He hated the pen and the work so had another inmate cut off 2 of his toes.  It’s too bad he didn’t have the inmate work on his prominent ears instead (see his likeness above).   Barrow was transferred to Huntsville for medical reasons and was released on parole from there.  The third known prisoner was David Crosby of “Crosby, Stills, Nash and Young” fame.  While imprisoned in Huntsville, he performed in the rodeo band and only served 5 months.

The displays at the Texas Prison Museum are unquestionably interesting.  Old Sparky, its electric chair, can be seen.  It is accompanied by a lurid description of the physical results of its use.  Ruth & I looked for a long time at a black walnut tree stump carved by a prisoner.  Over time he put the faces of 20 different animals into it, and we tried to identify as many of them as we recognized.   I spent a lot of time staring at the pistol that was removed from the Bonnie and Clyde death car and the nasty tools created by prisoners.

We are unaccountably glad we stopped to see the Texas Prison Museum.  I hope to see the rodeo if it resumes.

Since the beginning, I've had to avoid writing about the downside of travel in order to sell more than 100 articles. Just because something negative happened doesn't mean your trip was ruined. But tell that to publishers who are into 5-star cruise and tropical beach fantasies. I want to tell what happened on my way to the beach, and it may not have been all that pleasant. My number one rule of the road is...today's disaster is tomorrow's great story. My travel experiences have appeared in about twenty magazines and newspapers. I've been in all 50 states more than once and more than 50 countries. Ruth and I love to travel internationally--Japan, Canada, China, Argentina, Hungary, Iceland, Italy, etc. Within the next 2 years we will have visited all of the European countries. But our favorite destination is Australia. Ruth and I have been there 9 times. I've written a book about Australia's Outback, ALONE NEAR ALICE, which is available through both Amazon & Barnes & Noble. My first fictional work, MOVING FORWARD, GETTING NOWHERE, has recently been posted on Amazon. It's a contemporary, hopefully funny re-telling of The Odyssey. END_OF_DOCUMENT_TOKEN_TO_BE_REPLACED
This entry was posted on Saturday, February 8th, 2020 at 8:55 pm and posted in Texas. You can follow any responses to this entry through the RSS 2.0 feed.
« Washington-on-the-Brazos
Food on the Road »