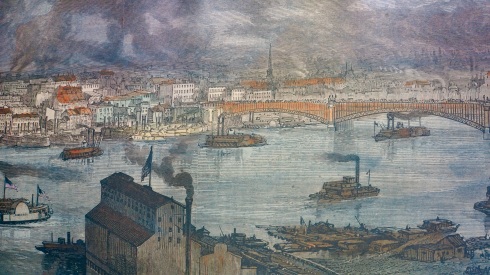 One of the trips we had to cancel because of the coronavirus was to New York City.   Ruth & I would have been there beginning March 17 for one week.  I’m glad not to be there because New York City now has the largest number of cases of COVID-19 in the USA with almost 18,000 people affected.  The actual # earlier today was 17,856, but that number has surely been passed.  There have been 285 deaths in New York State, which has the largest number of confirmed cases among the 50 states.

Our last trip before quarantine was to St. Louis.  Being a child who grew up near the Mississippi River, I was highly interested in this current exhibit at the Missouri History Museum named “Mighty Mississippi”.  Being a  river rat, I thought I knew a lot about the 4th longest river in the world and didn’t need to see this exhibit.  I was wrong.  Within 5 minutes I learned its widest point and the fact that it still provides the water supply for 50 cities along it. 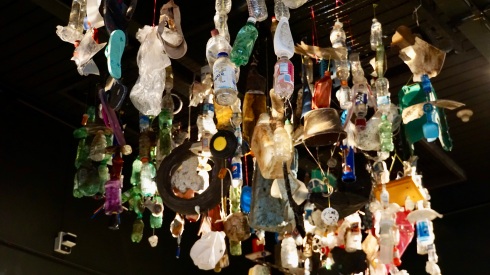 The Mississippi has had many names.  The Kiowa tribe called it Xosau.  The Ojibways called it Misi-ziibi, giving it its most enduring name.  The Ojibway Nation also was the source of the name for this river’s current widest point.  The Mississippi is 11 miles from shore to shore as part of Lake Winnibigoshish in Minnesota.  Near the information about its water-providing function in this free exhibit is a mobile of plastic discards hanging from the ceiling and news about this waterway’s pollutants.   Pesticides and chemicals find their way into it, and much of the plastic items tossed into it end up in the Gulf of Mexico in shocking concentrations.  It’s no wonder that despite the fact that in excess of 138 billion gallons of water per day flow down it, bottled water is a big seller in those plastic bottles. 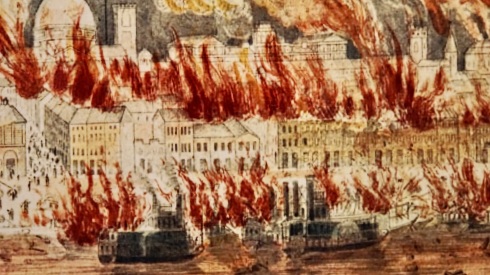 There are exhibits about floods, freight, riverboats, the Piasa bird, the innovative Eads Bridge that still exists, and this river’s impact on the St. Louis area.   My favorite exhibit was about the great St. Louis fire that I knew nothing about.  History books usually mention the Chicago fire, but in 1849 most of downtown St. Louis disappeared slowly after a small fire ignited the White Cloud.  The burning White Cloud steamer drifted downstream setting fire to cargo on the levee and 23 other steamboats.  When it died out, 430 buildings, which was most of the city at that time, had been destroyed.  Who knew?   I didn’t.

If an exhibit about this important river sounds like something that would appeal to you, it will be in the Missouri History Museum until April 18, 2021.  This museum, of course, is currently closed due to the virus, so that closing date next year might be extended when the museum reopens, whenever that is.  “Mighty” is certainly the word to describe this river that forms the core of a system that includes many other impressive rivers-Red, Illinois, Ohio, Arkansas, Wisconsin, etc.  I also learned recently that the 5th longest river system in the world is Siberia’s Yenisei-Angara.  Again, who knew?

Since the beginning, I've had to avoid writing about the downside of travel in order to sell more than 100 articles. Just because something negative happened doesn't mean your trip was ruined. But tell that to publishers who are into 5-star cruise and tropical beach fantasies. I want to tell what happened on my way to the beach, and it may not have been all that pleasant. My number one rule of the road is...today's disaster is tomorrow's great story. My travel experiences have appeared in about twenty magazines and newspapers. I've been in all 50 states more than once and more than 50 countries. Ruth and I love to travel internationally--Japan, Canada, China, Argentina, Hungary, Iceland, Italy, etc. Within the next 2 years we will have visited all of the European countries. But our favorite destination is Australia. Ruth and I have been there 9 times. I've written a book about Australia's Outback, ALONE NEAR ALICE, which is available through both Amazon & Barnes & Noble. My first fictional work, MOVING FORWARD, GETTING NOWHERE, has recently been posted on Amazon. It's a contemporary, hopefully funny re-telling of The Odyssey. END_OF_DOCUMENT_TOKEN_TO_BE_REPLACED
This entry was posted on Wednesday, March 25th, 2020 at 10:11 pm and posted in Midwest, United States. You can follow any responses to this entry through the RSS 2.0 feed.
« Reality Settling In
Astronaut Families »