One website says there are 12 cities named Portland in the US.  Another website says there are 30.  After doing research, I must conclude that most of them are very small.  There are really only 4 of any size, and they are in Oregon, Maine, Connecticut and New York. The one in Maine was the first Portland, and today it’s a city of about 70,000.  The largest Portland is the main city in Oregon.  I know it well because Ruth & I now live across the Columbia River from it.   It truly lives up to one of its nicknames, the City of Bridges.  Portland, CT has about 9,500 citizens.   It’s south of Hartford and across the Connecticut River from Middleton.  I didn’t know about Portland, NY, a city of 5000 people very close to Lake Erie, until I read River Horse.  Finding that there was such a place got me to thinking about how many cities of this name exist and resulted in this topic.

There are supposedly 2 Portlands in Colorado, but all I could find out about them is that the one in Ouray County, which I have been to, has a population of only 135; and the one in Fremont County was once a factory town.   Around the world there are streets, capes and ports, suburbs, and schools named Portland.  Website quora is convinced that just about every state has a place named Portland.

Despite the fact that they are across the country from each other, having 2 major cities named Portland can lead to problems.  The one in Maine is its largest town and Portland, OR is a beautifully situated city of more than 650,000.  I recently read an article that recommended seeing Portland’s Bug Light Lighthouse.  I am not a native here and it sounded interesting.  On the first day of the coronavirus scare, Ruth and I set out to see this lighthouse as a potential blog topic.  We could not find it.  When I got home, I looked it up and discovered that it was on Casco Bay in South Portland.  Portland, OR does not have a South Portland community.  Of course, Bug Light is in the OTHER Portland.  I wish the recommender had mentioned which Portland it was near. 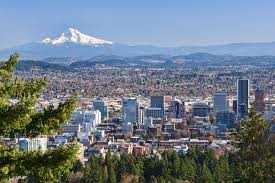 Portland, OR is a beautiful city nestled among mountains.  The most dramatic one, Mount Hood, can be seen from several vantage points in the city.  I have several dramatic photos of this potential volcano, but none of them equals the one here from roadaffair.com.

Since the beginning, I've had to avoid writing about the downside of travel in order to sell more than 100 articles. Just because something negative happened doesn't mean your trip was ruined. But tell that to publishers who are into 5-star cruise and tropical beach fantasies. I want to tell what happened on my way to the beach, and it may not have been all that pleasant. My number one rule of the road is...today's disaster is tomorrow's great story. My travel experiences have appeared in about twenty magazines and newspapers. I've been in all 50 states more than once and more than 50 countries. Ruth and I love to travel internationally--Japan, Canada, China, Argentina, Hungary, Iceland, Italy, etc. Within the next 2 years we will have visited all of the European countries. But our favorite destination is Australia. Ruth and I have been there 9 times. I've written a book about Australia's Outback, ALONE NEAR ALICE, which is available through both Amazon & Barnes & Noble. My first fictional work, MOVING FORWARD, GETTING NOWHERE, has recently been posted on Amazon. It's a contemporary, hopefully funny re-telling of The Odyssey. END_OF_DOCUMENT_TOKEN_TO_BE_REPLACED
This entry was posted on Thursday, May 14th, 2020 at 9:12 pm and posted in Northeast, Northwest, United States. You can follow any responses to this entry through the RSS 2.0 feed.
« A Heritage Corridor
The Missouri Confluence »